I recently read “The Deficit Myth” by Stephanie Kelton, the leftist “rockstar” economist that I saw someone calling her. And I get it, as a Modern Monetary Theory (MMT) advocate she is getting a lot of points for promising a future where states could afford to do anything without ever having to think about a “budget”. We love to listen to assurances of a better tomorrow, the problem here is that Kelton is making a pledge impossible to keep.

I recently read “The Deficit Myth” by Stephanie Kelton, the leftist “rockstar” economist that I saw someone calling her. And I get it, as a Modern Monetary Theory (MMT) advocate she is getting a lot of points for promising a future where states could afford to do anything without ever having to think about a “budget”. We love to listen to assurances of a better tomorrow, the problem here is that Kelton is making a pledge impossible to keep.

Modern Monetary Theory, or MMT, is a macroeconomic theory describing the currency as a public monopoly, and unemployment as evidence that a currency monopolist is overly restricting the supply of the financial assets needed to pay taxes and satisfy savings desires. In reality, this means that the federal budget should be financed with the printing press since it has access to it instead of taxpayers’ money.

Need to build another hospital? Don’t worry, we’ll just pay for it with bills we just conjured out of thin air. New infrastructure? Of course, let me just start the press. Are you working for the state and feel like you and your colleagues are overdue for higher wages? Not a problem.

In theory, this all of course sounds pretty good. We could build and sustain a society of high level health care, infrastructure, and basically fund every project that has been put on hold due to the government not having enough money to pay for it. Could this be the answer to all our problems? Could we really build a world and a functioning society for everyone in it by magically conjuring money out of the Federal Reserve’s hat?

Maybe. For a while. And this would probably be used as an excuse to speed up the experiment more, something we are already seeing. The Federal Reserve (and many other central banks in the world too) has created a black hole in which the only way out is to fund deficits with even further expansion of the monetary base. It is different this time and different means there will be different consequences (good and bad) in the future than the ones we are used to today.

I could spend an eternity discussing the problems with MMT, but that would not take away the fact that this is the way that we are heading, and it would be mindless to only argue against something that is inescapable instead of looking for the opportunities that come with it.

I have already touched on the subject of multiple inflation and how inflation can already be seen in asset prices waiting to leak over into consumer prices in earlier memos. Something that becomes clear when comparing total return performance of asset prices and real economy prices in local currencies since January 2009. 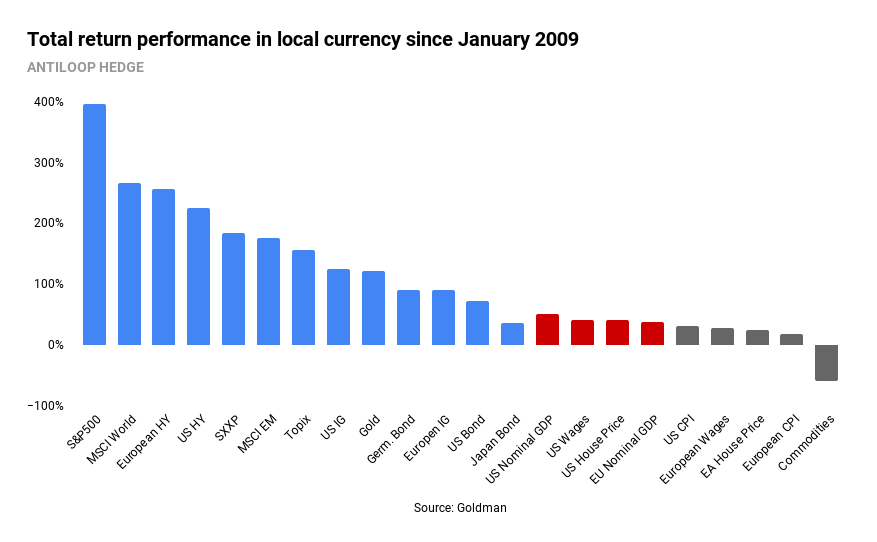 In this memo, I will walk you through a couple of possible future scenarios as I see them, focusing on what will happen to “real money” like gold and Bitcoin (and short term the whole cryptocurrency space).

Yesterday I wrote an email to my team, jokingly describing the year 2028 as a time when the pandemic is still raging since the virus keeps evolving holding the world in total lockdown. 90 percent of the listed companies survive on stimulus checks and money that they got from issuing negative-yielding bonds bought by Robinhooders and pension funds. Since the market is “forward-looking” and there are daily headlines like “vaccine candidate shows promise” on the news, the Schiller P/E ratio is trading at 400 on the S&P 500, and the best performing sector the last two years has been airlines even though most of them have not had a plane in the air for years. However, that does not matter because it means it can only get better. Bullish.

Of course, I don’t really see this as the real future. Although we are in the middle of an economic crisis some say is as bad or maybe worse than the great depression in the 1930s (the Fed denies this by saying CPI has not declined as much as it did then or that the stock market has not suffered as much, which is hilarious when thinking about how much money they have printed this time), I believe the future for some assets, both long term, and short term, is fundamentally brighter than ever.

The flight to scarce assets

It is no secret that me and my team believe that gold will be an asset to count on in the coming years. The price, that long term is driven by inflation, as in the definition of expanding the monetary base, would be fuelled by the MMT environment. Another probable scenario is that since interest rates will stay lower for longer, there might be a shift in how pension funds and other big institutional investors will allocate their capital to diversify against equities.

Traditionally pension funds have been using treasuries as a way to de-risk their portfolio. Since we shifted to a zero- to negative yield reality these assets can no longer be seen as “risk-free” as they promise per definition to deliver at most no return and in many cases a negative return without taking inflation in account, meaning in all cases the investors will be losing money.

There are already examples of pension funds, insurance companies, and private wealth specialists re-defining “risk-free” by buying some gold to cover up for what they are expecting to lose on bonds and as a way to hedge against equity volatility caused by liquidity injections.

Gold has been used as money for thousands of years. And every time another fiat experiment has failed we have gone back to the precious shiny yellow rock, only to once again get greedy and issue more bills than we have gold in our safe. Because we, like advocates for MMT today want MOAR of everything; more infrastructure, better health care, and so on. Then history repeats itself like a broken record and economists stick their heads in the sand, blaming whoever but themselves for the crisis that occurs when people all of a sudden no longer trust the paper bills they have in their hands.

So where do the fiat skeptics go?

Today there are a lot of options. As gold would be the more obvious answer in regards to what I wrote above, another one is crypto.

In some countries, the trust in the local currency is so low that companies have to offer to pay their employees in USD and in some cases crypto instead of the country’s own currency to attract talent. This is what happens when a state prints money like there is no tomorrow.

The crypto discussion is somewhat polarized in our office. We are all confident that the market has just started another bull run, not unlike the one we saw during 2017, but some of us are more fundamentally driven and others believe it will lead to another speculative bubble.

My good friend Eric Wall, CIO at Arcane Assets, wrote in his thoughts of November that a symphony of positivity has been coming together for bitcoin. It started with Paul Tudor Jones in May who has since been followed by other giants like Stanley Druckenmiller and Ben Miller, accompanied by PayPal, MicroStrategy Inc., and Square slowly making bitcoin a little bit more mainstream and accessible.

The overall sentiment change regarding bitcoin can already be seen in the price. After suffering a fall of more than 50 percent from its high in February, bitcoin has climbed from around 4940 USD as its lowest point to trade over 16400 USD when I’m writing this. This price development is only set to accelerate the popularity of bitcoin as people are looking for an alternative to broken fiat currencies.

MMT and money printing in general is leading the way toward higher gold- and crypto prices (as well as other assets) by fundamentally re-writing the rules of financial markets. A bigger monetary base means higher prices - of everything. We know this, we have been through it before, and still, we make the same mistake over and over again, all driven by greed. However, it is a good thing after all that it is not that different this time in regards to expanding the monetary base. Since we actually have made this mistake before, we know what type of assets we should flee to, to protect ourselves from this final fiat experiment, and the answer is - the scarce ones.

What will happen after this failing fiat experiment is uncertain, but one thing is sure, and that is that digital assets will be part of it.