Procrastinated risk is knocking on the door

Consumer Price Index rose 8.6 percent in the United States in May, marking a 40-year high. As consensus said we had reached peak inflation in March and CPI was estimated to come in at 8.3 percent, the unexpected elevation caught markets by surprise, and S&P 500 fell almost 3 percent on the news.

The world is holding its breath while waiting to see what camp of economists has been right regarding whether we are heading into a stagflationary environment or not. While the fear of a recession as the Federal Reserve is being forced to aggressively react to higher-than-expected inflation is far from being a consensus view, I believe it’s imminent.

One of the less optimistic voices in the macroeconomic scene is JP Morgan’s Jamie Dimon, who in an interview said that JP Morgan is preparing for a “non-benign environment” and predicts what he calls an economic hurricane. The chaotic prophecy is due to the Federal Reserve’s actions moving forward, where Dimon fears the consequences of what would happen if the central bank would also start to unwind its bond portfolio at the same time as raising interest rates, something that the market, according to Dimon, is not prepared for.

Inflation has long been a problem of the past, and central bankers have spent the last one and a half decades stimulating the economy, only to see asset prices skyrocket. Still, the CPI stayed relatively stable (at least if we are to believe official numbers, if you like me doubt those, read this). In the other half of last year, that changed. We have since then witnessed policymakers go from claiming it’s transitory to calling it “Putin’s price hike” and now to admit that what they thought they had under control seems to be a more widespread problem than first anticipated. With real rates still far below zero, the only tool left in the Federal Reserve’s toolbox is a recession to cool demand, and believe me - one is coming.

The problem, however, is that while a recession might temporarily make the inflation problem seem to be contained, inflation is neither transitory, momentary, or under control. We have entered a period that, for years ahead, will be marked by secular inflation and, thus, more peaks to come. 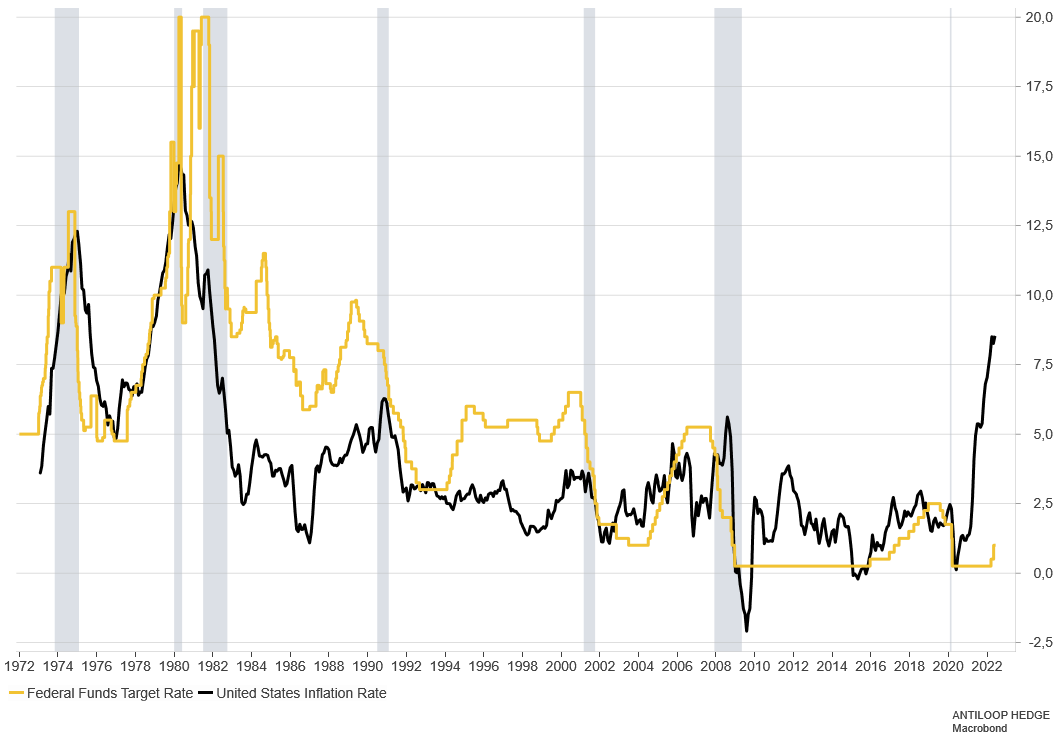 When bad news is good, and good news is bad

Markets first surged a few weeks ago when the Federal Reserve announced they might raise rates more aggressively to create room to handle a potential recession in the future. The news that in a sober macro environment would have created massive sell-offs instead painted a picture of a future with more stimulus.

Moreover, when nonfarm payrolls came in higher than expected, it meant that Powell and the Federal Reserve could keep on an aggressive monetary policy tightening path to cool demand, making a dovish turn look unlikely anytime soon.

At the same time, several companies have announced that they are planning on cutting parts of their workforces, as leaders of the companies believe we are heading into a recession, or as Elon Musk called it, “having a super bad feeling about the economy.” The issue is that while these layoffs will eventually be visible in later presented job numbers, there will be a delay, meaning Powell will continue aggressively raising rates into higher unemployment and a recession sooner or later.

But then again, a recession or weaker labor market would mean that the Fed would turn, and markets could set to run off on another long-term relief rally to new all-time highs? In this case, it’s not really that simple. The main problem for financial markets is that it is different this time as the Federal Reserve is pressured by the White House to prioritize fighting inflation rather than helping the economy. We can, in other words, expect a bumpy road (downwards) in stocks moving forward.

Helping the economy or fighting inflation?

When Paul Volcker in the 1970s took on the mission to fight inflation, he did it knowing it would also wreck the US economy. To compare Powell with Volcker would be an insult to Volcker, but in the last few weeks, I believe Powell has with no doubt shown a more hawkish decisiveness than we have gotten used to since the pandemic.

Being the Fed chair is unquestionably an ungrateful position, especially when you have to choose between saving the domestic economy or preserving the US dollar as the global reserve currency. Although there are many similarities between the 1970s, we can also find some differences. Back then, the US dollar stood unchallenged as the global reserve currency, and the United States was far from the levels of debt that we see today. Since then, the US dollar dominance in global currency reserves has been shrinking as countries are moving to diversify their reserves.

In 1959 Yale professor Robert Triffin sat in front of the Congress's Joint Economic Committee. He explained how the Bretton Woods system was destined to fail as the US dollar would never survive as the world’s reserve currency without the US running ever-growing deficits. Professor Triffin was ahead of his time, but he was also right, and today the US is running the most significant account deficit in the world. Today, we refer to the conflict between short-term domestic and long-term international objectives for countries whose currencies serve as a reserve currency as the Triffin paradox.

It has been more than 50 years since the US left the gold standard, but up until 2005, the US was by some definition pegged to something else - oil. Whenever prices went up, the Fed would raise rates, and whenever prices went down, the US responded with loosening policy via fed funds. After the run-up in commodities prices from 1974 through 2005, oil traded roughly 15 USD to 30 USD per barrel. 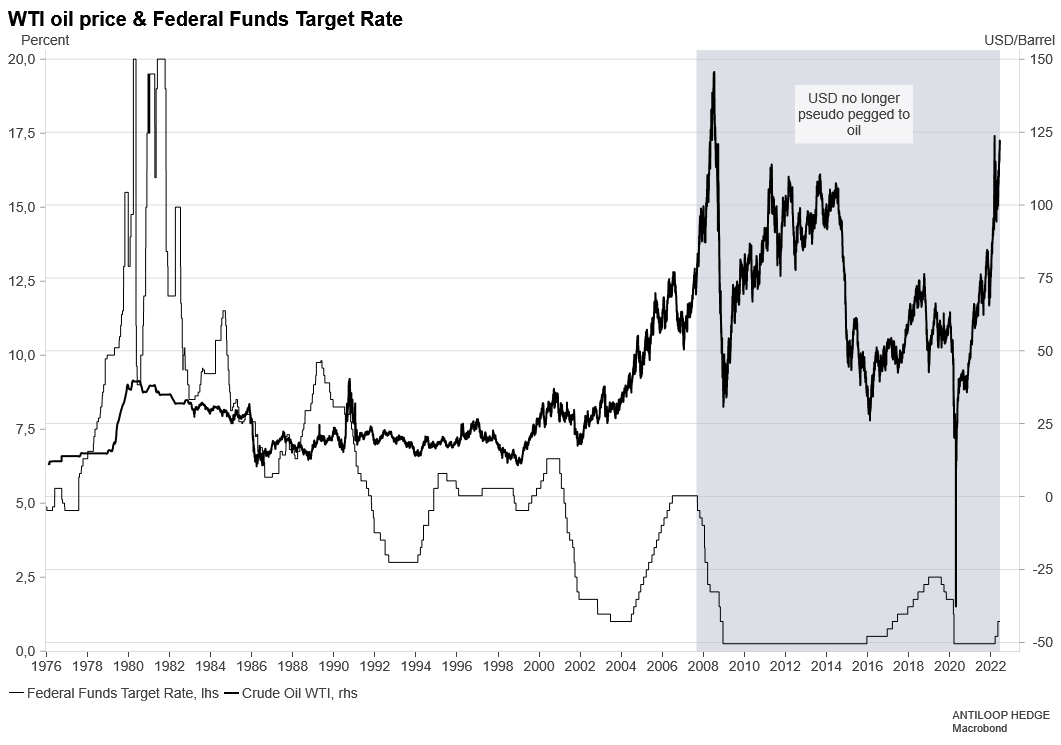 For 30 years, the US dollar was kept in range by being pseudo-pegged to the oil price. But in the first decade of this century, we saw spectacular growth in China and, as the Chinese economy industrialized, it created an enormous demand for commodities. Between the year 2000 to the end of 2007, oil demand grew by almost 83 percent in China, compared to only 14 percent in the rest of the world. And, when demand for oil fell in the rest of the world during the great recession of 2008, Chinese demand kept on growing.

At first, when the oil price soared in early 2000, Federal Reserve answered as usual by raising rates, but when rates were at over 5 percent, and oil since long had surpassed both 30, 40, and 50 USD per barrel, the great recession hit, and Fed had to choose between sacrificing the domestic economy and get the oil price back in range by continuing raising rates, or to bail out the banks from the subprime crisis. We all, of course, know that Bernanke chose the latter, which has brought us to where we are in markets today. For Powell on the other hand, the courage to act will mean something completely different than just kicking the can of risk forward another year or two.

On another curious note, when looking at the oil priced in gold, it basically looks flat since the beginning of the 1970s, leading me to believe we’re either waiting for a continuous bull run in oil or for the gold price to drop. As the latter does not seem so likely at these levels, I believe secular inflation forces will bring both the gold and oil price up further. 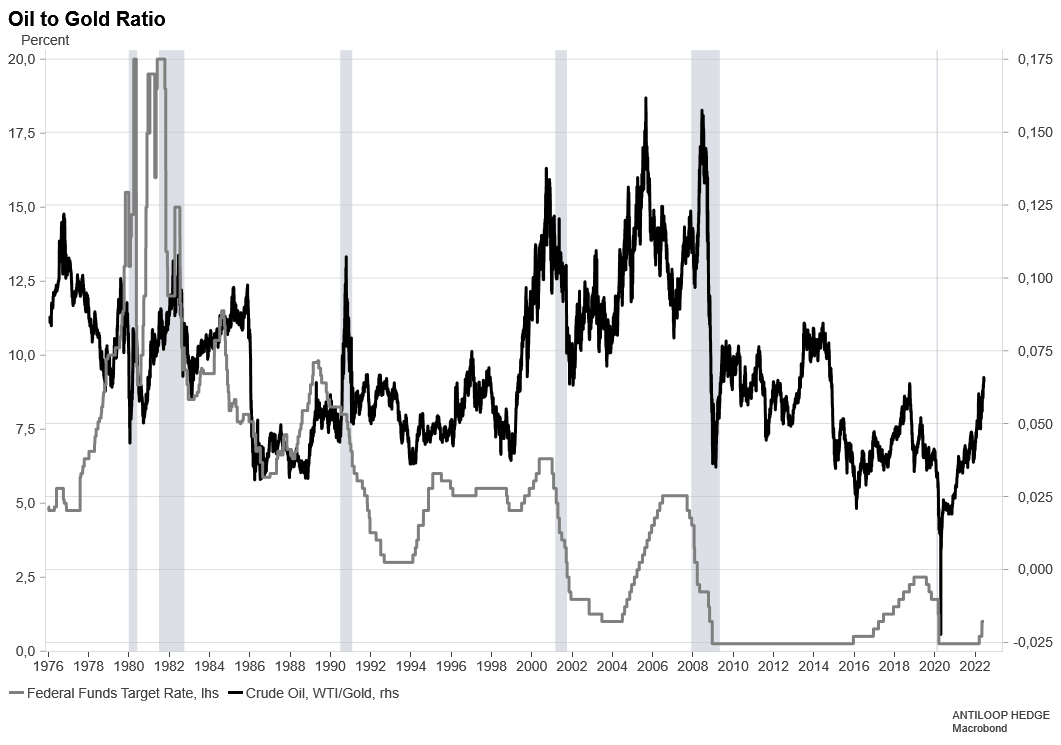 Characteristics of a supercycle

While I believe it is hard to make predictions longer than 6-12 months as markets move in pair with how Fed policies change, if I had to choose one asset class to own in the coming decade, it would undoubtedly be commodities. Although commodities have had a strong start in this secular cycle, we are still far from the top.

The difference between short-term price volatility and immediate supply disruptions due to weather or geopolitics, high and low prices persists over long periods during a supercycle. The structural shortage of goods is often caused by rapid growth and industrialization of a nation or region and creates a lag between unexpected, persistent, and positive trends to support commodity demand with slow-moving supply (e.g., building a new mine or planting additional crops).

Another vital factor to remember when considering hedging one’s portfolio with commodities is that although the long-term trend looks positive, there will be short-term price volatility. From 1972 to 1981, the broad commodities index S&P GSCI rose more than 500 percent, but, on the way up, there were several drawdowns of 30-50 percent. 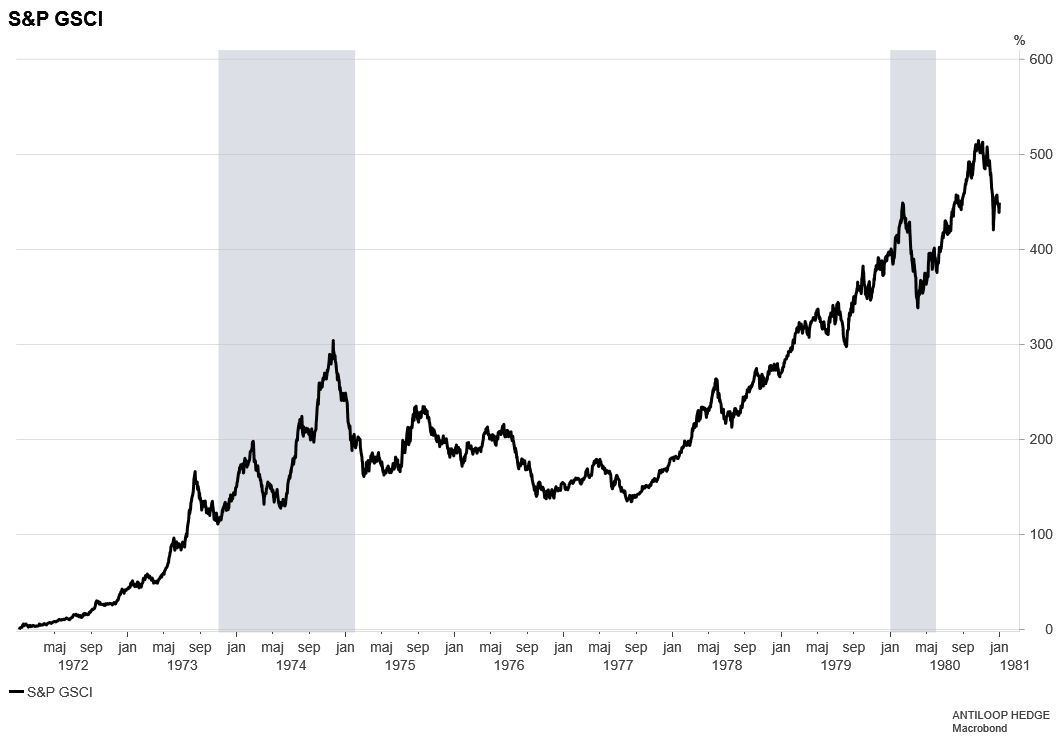 If we were to compare the performance of commodities now with then (since the beginning of last year, right before CPI took off, the S&P GSCI is up around 120 percent), it is clear that these are early days. And although history doesn’t repeat itself, it often rhymes.