I have come to find that there is an eager appetite to misunderstand the concept of inflation; not only the original definition but also the consequences that follow. The reason behind the misconceptions of inflation has as much to do with it being a complicated subject as with policymakers actually from time to time re-defining the meaning of it. We will dig deeper into the not so constant meaning later, but first, I would like to share a story from the 16th century.

In 1519, the conquistador Hernán Cortés de Monroy y Pizarro Altamirano, 1st Marquess of the Valley of Oaxaca (to keep it simple, I will just refer to him as Cortés in the rest of this memo) invaded the Aztec Empire in today’s Mexico and successfully defeated it two years later in 1521.

During this time in Spain and the rest of Europe, silver and gold were mainly used as money, hence the unit in which someone would measure wealth. When Cortés came to the Aztec Empire he found that it was rich in precious metals, something Cortés took advantage of by mining it at minimal cost to send it to Europe and Spain.

The sudden and large influx of gold and silver in Spain led to prices rising roughly sixfold over 150 years, or 1-1,5% per year. The price rise eventually resulted in the bankruptcy of Spain(!) due to rising costs to sustain the Habsburg war, and the impoverishment of people living on fixed income and small rents. At the same time, bigger traders and sellers made fortunes on the benefits of inflation, causing wide inequality problems.

The speed of light is immutable, it is what it is. Physicists can measure it with varying tools and methods, but the physical reality stays the same. The temptation to change the definition of a critical variable to suit one’s objectives is understandable. The de facto reality, however, remains unaltered underneath the semantic veneer. But, changing variables and definitions is actually exactly what policymakers in monetary policy have been doing for a long time.

Before 1933, when the United States still fully used the gold standard, the definition of inflation was to expand the monetary base. Back then, inflation was not seen as something good or even necessary for the economy, something that changed when President Roosevelt took office in March 1933.

After the Great Depression Roosevelt wanted to prevent another bank run and declared a nationwide bank moratorium and forbade banks to pay out gold or to export it. The economy was in bad shape, and according to Keynesian economic theory, one of the best ways to avoid an economic downturn is through inflation (defined as expanding the monetary base).

Since then a lot has changed. We have, through the last century, witnessed how we went from believing inflation is neither necessary nor good for the economy, to later change the definition to rising consumer prices. After that, something interesting happened.

In a few decades, we have gone from trying to prevent inflation, to decide we should allow it, as long as it is lower than 2% every year. Subsequently, it was changed to 2% every year to now, recently, at least 2% every year since the Consumer Price Index has shown somewhat lower numbers than that in recent years.

Although the truth is that over the last 20 years the average inflation rate has been 2,12% yearly, and in the last 10 years on average 1,72% (which is for everyone, except apparently for Powell, pretty close to 2%).

In my last memo, I introduced the concept of multiple inflation and said that I did not believe the liquidity injection pushing the market higher would be seen in the Consumer Price Index (CPI). I purposely only mentioned CPI instead of talking about consumer prices in general, since I believe the cost of living will be rising, even though I am not so sure it will be as visible in CPI, at least not for now.

Let me explain why.

Since inflation is far from a physical constant there are different ways of measuring it. The more traditional CPI has been criticized for several reasons, both because it does not take substitutional goods into account nor capture innovation, meaning the inflation rate can look lower than what it actually is.

From the beginning, the CPI was determined by comparing the price of a fixed basket of goods and services, called COGI (Cost Of Goods Index). But, over time, the U.S. Congress changed this to reflect changes in the cost to maintain a constant standard of living, resulting in COLI (Cost Of Living Index), and the CPI as we know it today.

The overall changes that have been made, both by switching from COGI to COLI and later revisions, have been criticized to allow the U.S. Government to report a lower CPI, something that would motivate even more monetary stimulus, which I also mentioned in my last memo about multiple inflation, leading to inflation (e.g. in asset prices).

In the chart below I am comparing the CPI with Shadowstats that offer an alternative way of measuring inflation together with yearly changes in the money supply (M2). 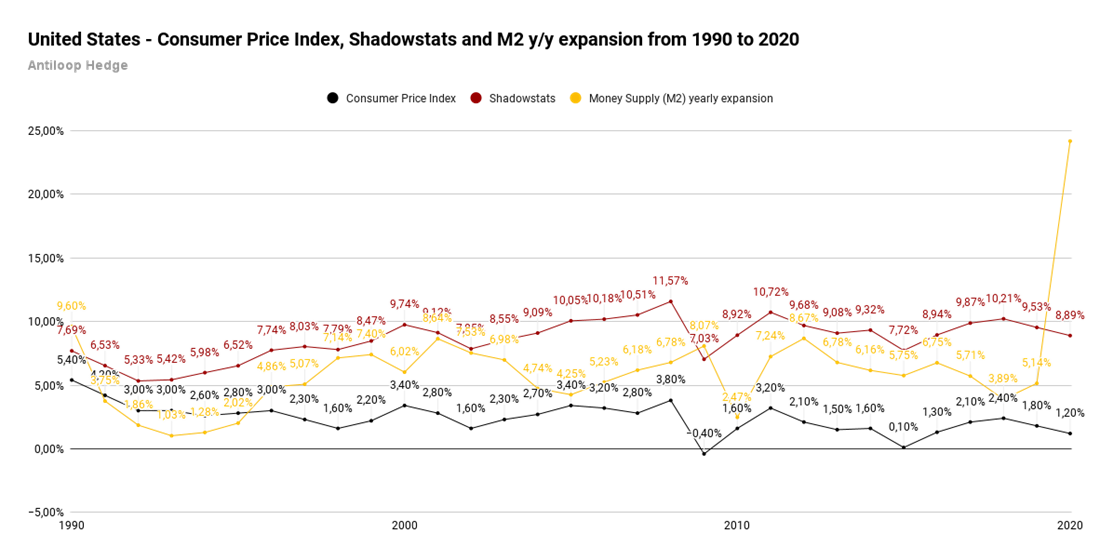 But why a) do we have an inflation goal of (at least) 2% and b) why would the government want to manipulate the numbers into looking lower than they in reality are?

The short answer is debt.

Since government debt and deficit are in nominal values, when inflation increases the national debt decreases since the interest paid is worth less in real terms at a higher price due to falling real deficit. This means that not only can expanding the monetary base be used as a tool to cover budget deficits, as long as we have inflation the debt will not grow as much in real terms as in nominal terms.

Setting a goal of a 2% inflation rate and at the same time keeping the CPI low motivates more monetary stimulus to cover budget deficits, even if the real inflation rate already is much higher.

What Keynes wanted to be used as a tool to prevent an economic downturn, is now how we year after year handle budget deficits (I imagine Keynes would turn in his grave if he knew what central bankers are doing under his name today).

Budget deficits are not a new phenomenon, but the scale and rate of growth since the beginning of the millennium is, and growing the debt nominally as we stimulate inflation is the only way to push this since long broken fiat machine forward yet another year. 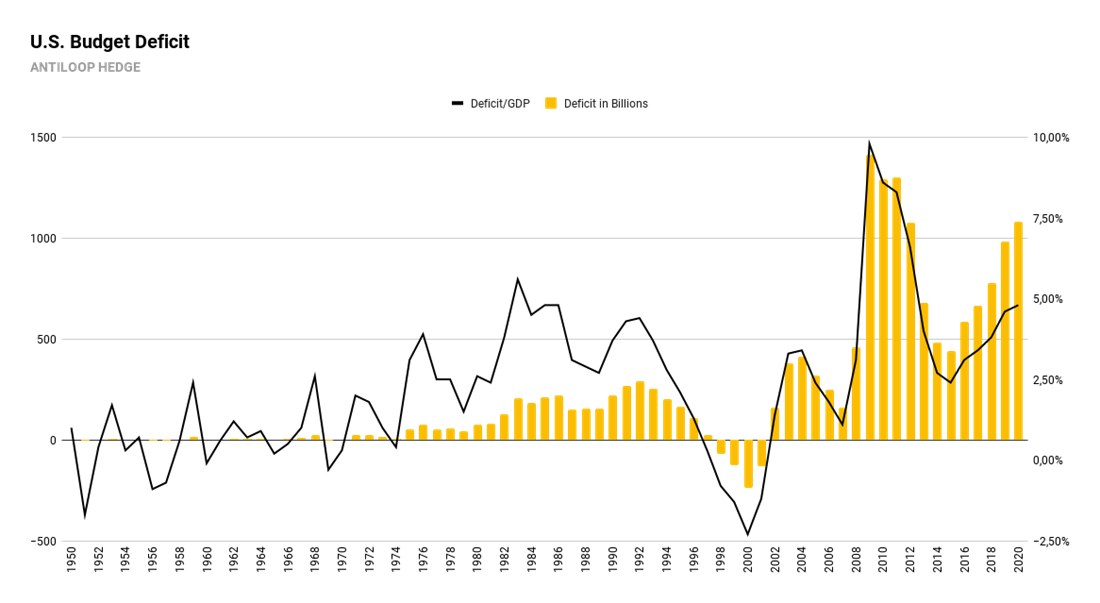 Printing money and making people believe that is a good thing while the value of their savings gets devalued without them realizing that that is really the case must be the most sophisticated pyramid scheme in the world.

People still tell me that central banks need to print money so that they can reach the inflation goal but rarely have an answer when I ask them why they think we have an inflation goal of 2%. Well, now you know. They are trying to avoid debt deflation.

What we are witnessing now is not at all so different from the 16th century, except we are doing it at a more rapid speed. By now we have created a “fiat monster” that can not be stopped in any other way than a complete reset of the financial system. But on the other hand; that is exactly what has always happened with every fiat currency system ever throughout history.

The story about Cortés and Spain is in no means unique. In Great Britain, the parliament burned down in 1834 when they decided to burn something called tally sticks which had been used as money for hundreds of years. Since it was easy to issue the tally sticks, the monetary base had grown to devalue the currency of Britain, and they decided that the best way to cope with the inflationary problem was to simply burn a large chunk of the fiat currency of the time.

However, the fire spread, causing the biggest conflagration in London between the great fire in the 17th century and the Blitz of the Second World War.

After that, Great Britain issued another fiat currency that over the years lost over 99% of its purchasing power due to more money being printed when the budget deficit needed to be covered.

In 500 years of time, we have learned nothing.