I promised myself not to write yet another memo about monetary policy. Then I landed in Argentina - the Mecca of inflation - and it suddenly became clear to me that the USD is heading in the way of the ARS, and I could not help myself.

Time should be the universal way to measure wealth, as it is a perfectly defined deflationary asset, with inflation being its thief. The problem is we don’t know how to measure time or at least not how much of it we have left.

Up until now, the most convenient way has been by using fiat money as the unit, or as my friend Robert Breedlove beautifully described it in the piece Bitcoin and the Tyranny of Time Scarcity:

“Money is the most marketable (or readily exchangeable) capital in an economy; it is the most liquid measure of time savings — a social chronometer of sorts."

“I’m sorry, this must bore you.”
I had landed merely a couple of hours earlier in Buenos Aires, Argentina, where I would spend the last few weeks of 2020 as well as the first ones of 2021.
“Not at all,” I answered my brother in law who had just updated me on the inflation situation in the country.

Inflation is deeply integrated into people’s lives in Argentina. Most can tell you the rate of the USDARS (both the official and blue rate) in their sleep, and no one would ever measure the wealth they might have in the local currency, but in USD instead. The problem now is that the Argentinean government has, among other things as a way to deny the inflationary problem, also made it illegal to buy more than 200 USD for your ARS every month. However, the consequence of this is that it only pushes the inofficial USD rate higher and creates an even bigger demand to change your ARS for something else.

As someone who grew up and lives in Sweden, where the knowledge of inflation is limited to “it is something that the central bank says we don’t have enough of.”, the level of understanding in Argentina is refreshing. People who have seen what inflation truly does to a country no longer believe in the monetary policy lie of “they probably know what they are doing.” that a large part of the world has swallowed. Instead, they are constantly searching for options when their country’s economy is on its way to reaching the bottom, and the local currency is in a downward spiral of doom.

My five weeks long trip was in many ways futuristic. As I stumbled upon monetary issues that needed to be solved in order to go on with our everyday lives in the city that houses over 15 million people, it suddenly struck me that Argentina's mess is our future.

Argentina’s monetary base was expanded by almost 58 percent during 2020. That is a lot of bills being printed. Actually, it is so much that Argentina had to get help from Brazil in order to be able to print the amount “needed”. Sweden also proved to be helpful in the Argentinean Central Bank mission by providing the paper needed for the soon to be worthless pesos.

The result of the printing could not unexpectedly be seen in the official report of the country’s inflation for the same year, which in the end landed at slightly above 36 percent. Even though the US in comparison looks pale with its 24 percent expansion of the monetary base (M2), the only real difference between the USD and the ARS is that there still is a demand for the USD, something the ARS has not seen in a long time.

The million-dollar question here is, though, for how long will there be a demand for the USD? And what will happen when the world turns from it as its reserve currency?

In the future, I simply believe that the entire American economy, south, and north, will mirror the current state South America finds itself in already.

As I mentioned earlier, Swedes generally have a poor understanding of how monetary policy can affect people. We are privileged in the sense that we don’t have to care about what the central bank here does (at least that’s what most people think, I am of a different opinion). That is why it is not strange that one of the most common arguments against cryptocurrencies is that the only use cases would be to finance terrorism, buy drugs, or work with trafficking (these are real examples from a question I got not that long ago).

And I get it. As Swedes, we have never had to worry about if our salary would get devalued so much at the end of the month that we could no longer afford a loaf of bread to feed our families. We have been able to live in perfect ignorance while laughing at the bills with a ridiculous amount of zeroes that they print in countries like Zimbabwe. A problem far from home is not my problem, seem to be the mindset of many, forgetting that this could, and probably will, actually happen to you too.

I don’t believe that we can afford to keep on living in the bliss of ignorance anymore. The pandemic pushed the central banks over the hill, and now there is no turning back. What the next monetary paradigm will eventually look like, we still don’t know. But trust in the system as we know it today is threatened, and the shift has begun. We can only hope our time measuring unit will not be as devalued in the future as today.

The world as an ecosystem

A big problem that most countries have in common is that they don’t see the world as a big ecosystem. One great example of that is how wealthy countries are handling plastic waste. Today, plastic waste is not sent to a place within the same country where it is recycled into something new but is sent to a more impoverished country instead. The US sends its plastic waste to Vietnam, Malaysia, Ecuador, Cambodia, Indonesia, and six more countries.

We have become obsessed with human-made lines on a map, blaming issues on whole cultures, and sometimes forget that we, in fact, are the same. Although I am politically far from China’s government’s views, it is fascinating to see how the great economy in the east seems to be one of few, if not the only, countries that look at the whole world as its game plan. I believe it is connected to the fact that China, instead of changing politicians every fourth year with their own agenda, have a long-term plan with the goal to grow as much as possible.

When the population of China became richer it stopped being the cheapest alternative to manufacture electronics. To maintain high margins, China built factories in Africa while helping them build infrastructure. A play that over time will give them more power over the fast growing economies in Africa. An even more interesting note is that after the pandemic, China has promised to help African allies with vaccine. A promise they made after donating millions of masks and testing kits.

In South America, something similar is happening. After the US tariffs, China moved from importing most of their soybeans from the US to South America, with Brazil as its leading provider and Argentina in third place. Now China and Argentina have just agreed to move a part of China’s pig population to Argentina since it is from there the food comes anyway. At the same time, they are offering settlement payments in Yuan rather than USD.

A brief history of reserve currencies

In order to sketch a possible future for the USD, let's take a look at the shifting sands of reserve currencies over the last half-millennium. The de facto "reserve currency" was simply the most recognizable, trusted, and liquid currency. In effect, the country dominating world trade would also command the currency used as a unit of account in global commerce.

Since the 15th century, we have seen Portugal, Spain, Germany, France, and Great Britain as the world’s reserve currency issuers. Since this was long before we left the gold standard to finance budget deficits by printing more money, it would be fair to say that the real reserve currency before the USD took its place as the global settlement currency was gold.

When World War I started in 1914, many countries had to abandon the gold standard to pay their military expenses with fiat money, which devalued the countries’ currencies. Great Britain tried to avoid this for as long as they could to maintain their status as the world’s leading currency but eventually failed and had to borrow money for the first time in 1917 before leaving the gold standard in 1919. As a result of this, other countries turned to the US instead as a lender, and the USD took the Sterling Pound’s place as the leading global currency.

Before the US entered WWII, they served as the Allies’ main proprietor of weapons and supplies and received most of its payment in gold. After the war, the US owned most of the gold in the world, leading to the USD being one of the only currencies still linked to gold. Leading to the historical decision in Bretton Woods, New Hampshire, when delegates from 44 Allied countries decided that it would be the USD that would serve as the reserve currency from then on.

Today, almost 80 years later, roughly 60 percent of global trade is settled in USD. Many things have changed since the meeting in Bretton Woods, and the USD has not been linked to gold since 1971. There is no doubt in my mind that the USD has served its role as the reserve currency, and although over 60 percent might sound like much, it is crucial to keep in mind that this number has been shrinking for more than two decades. 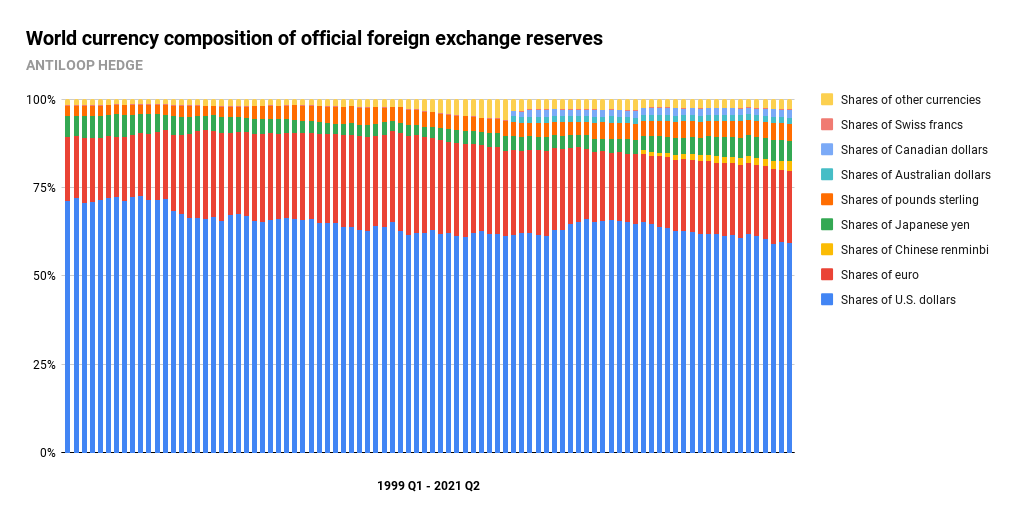 I believe this chart will look substantially different ten to fifteen years from now. The Chinese renminbi might look like it’s playing only a small part now, but it gets more interesting when looking at the relative rates of change for alternatives to the USD.

As mentioned earlier in this memo, China has begun to move production, of both food, and electronics, to Africa and South America. In exchange, these two continents with their countries get paid in so-called Yuan credits. Over time, this will create an even bigger demand for the renminbi, and maybe countries, like Argentina, that today are struggling with their US dollar reserve will have an overweight in Yuan instead.

To summarize, I believe we are heading toward a future where the Chinese renminbi plays a more critical role than before as an alternative reserve currency. And by that, I don’t mean it will take the US dollar’s place, but that it simply will be an alternative. I also believe that we are far past the “one currency fits all” ideology that choosing one reserve currency is. Central banks will keep diversifying their foreign exchange reserves even more than today. However, that means that the USD will lose its power as the Yuan (and other alternatives to the USD) is getting stronger from growing demand, but that will take a lot more time than a couple of years.

What role crypto will play as exchange reserves in the future is yet to be seen. But one thing is clear, more and more people are choosing to measure wealth, and the time they have left in something else than inflationary fiat. And at some point, states will have to follow.