Dawn of the supercycle

In the last couple of years, commodities have been somewhat of a widowmaker trade as traders and investors have tried to call the bottom since the last top in 2011. But now it seems tables have turned in favor of real assets.

Nine months have passed since I wrote the memo “The Forgotten Asset Class” about soft commodities. Since then, it is safe to say that the declared dead asset class has come to life once again, with one important exception - gold.

The case for a commodity supercycle looks clearer every day. Normally, in the dawn of a supercycle, we can identify one or two key drivers for the market to break up. In this case, several equally exceptional factors are aligned, both structural and cyclical.

From monetary to fiscal dominance

The most important macro driver is with no doubt the inflationary regime we have just entered as a consequence of over a decade of easing monetary policy. In addition, we have just left the era of monetary dominance for more activist fiscal dominance. Historically, this has meant that the underlying inflationary risk has risen, something we have seen in the last few months.

We can no longer deny that inflation is here. Not even with Fed’s normal tampering with CPI do the numbers look artificially low. Powell’s new strategy, however, seems to be to call it “transitory”, and to my surprise, many buy his lie.

Now the power really lies in the Federal Reserve’s hands. When CPI in the ’70s rose to double-digit levels as a result of the US leaving the gold standard to cover budget deficits, former Fed president Paul Volcker had the courage to act and raised rates to 20 percent in 1980. That could never happen today.

Rates have gone down globally since the financial crisis and it’s no longer uncommon that countries have a zero percent or even negative interest rate. Money has not only become cheap, but free, making credit look like the most attractive option, for both corporations, people, and the state. This accumulation of debt has made it impossible for Powell to raise rates in the future, but that does not mean that he can’t threaten to do it.

With fiat as far from being sound money it can be, we need someplace to store our capital, as we wait for the inflationary turmoil to be over. For thousands of years, gold has played an important role as money - a medium of exchange, store of value, and a unit of account. When we introduced “paper money”, backed only by trust in a centralized entity, with the promise of keeping the value stable, gold lost parts of this original role.

This year marks the 50th year anniversary since the US was the last country to abandon the gold standard. Since then, the US dollar has lost almost 84 percent of its purchasing power and for some reason, it is widely accepted that gold has never outperformed the stock market. That is not true. Gold has on average returned 10.51 percent every year since 1971 while S&P 500 annual average return was 9.16 percent. 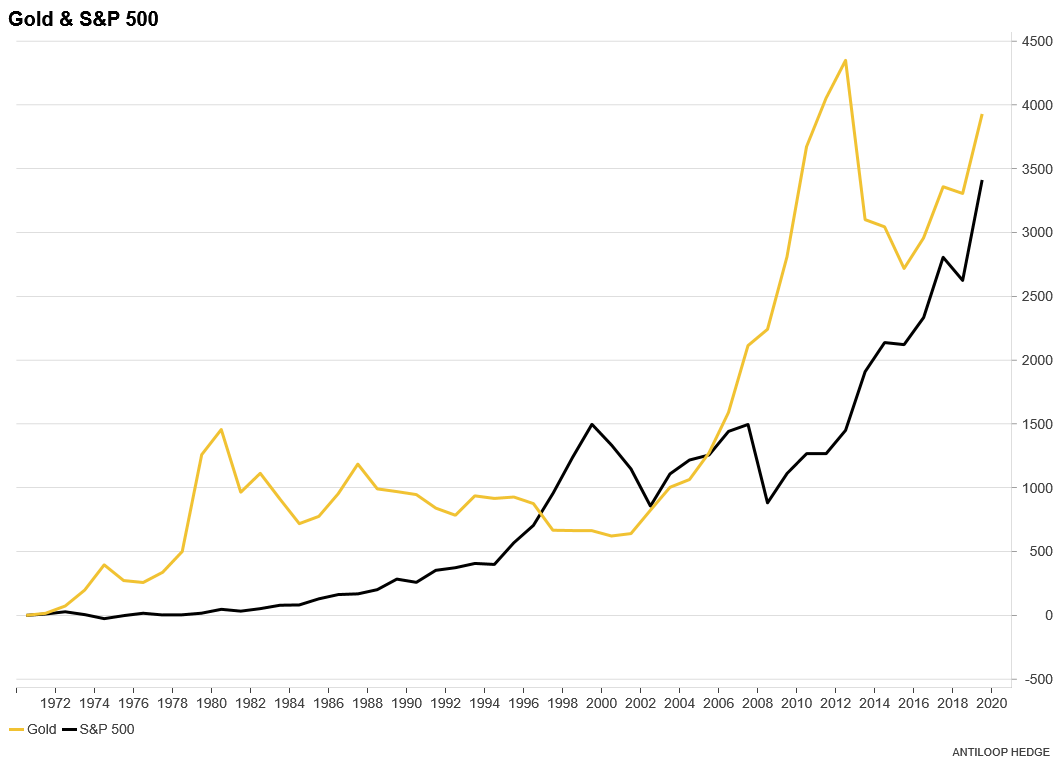 In 50 years of unbacked paper money, central banks have proved that the one thing they are capable of, is in fact not to maintain the value of the currency, but to devalue it to almost nothing while keeping its users in the dark. The “no inflation”-lie, must still be one of the best magic tricks ever performed in modern history.

I’ve been an advocate for having gold and commodities as a dynamic part of one’s portfolio for a long time, but I believe the timing has never looked any better. As gold has fallen more than 10 percent from its previous highs last summer, the fundamentals have gotten stronger simultaneously. Doubts about its role as an inflation hedge and fear of higher rates as well as a risk-on mindset among investors have punished the price short term. I believe this is about change.

To appreciate the case for gold, one must understand the reason for owning a yellow pet rock in the first place. - Because let’s be honest here, you may call it whatever you want, but in the end, it really only is a shiny rock. - So bear with me as I will lay out the reasons why you should buy gold at these levels, the long-term case and short-term price catalysts.

Although many economists call gold a “safe haven”, it’s not the real reason to own gold. Even if the gold price tends to rise short term during times of uncertainty, it almost always falls back to the same levels shortly after. Meaning buying gold on one of those price spikes is usually not a profitable affair in the short run.

The main reason, however, why you should want to hold at least some gold, is to be able to sell when the stock market is plummeting so that you can buy equities at a lower price, as gold tends to be contra cyclical to stocks over time. The long-term focus in a portfolio should always be to find ways to maximize the amount of producing assets. Owning assets with low correlation to stocks can help you achieve that.

Gold is a long-term hedge against inflation. Since the United States left the gold standard, the gold price has gone up on average as much as the Federal Reserve has expanded the monetary base every year. This, however, does not mean that gold, or any other asset, works as perfect day-to-day, or even a quarter-to-quarter hedge against money printing. However, if the price of gold falls sharply in a highly inflationary environment, it is usually a good time to buy.

There are no guarantees that the gold rally of 1979 will be repeated. Back then, the Federal Reserve did its utmost to paper over many years of large budget deficits, but in effect only made matters worse by supporting the ongoing irresponsible fiscal spending spree. Eventually, the former reserve asset rallied 119 percent in dollar terms during a single calendar year.

No guarantees, of course, but the stage for a sudden doubling for the gold price is set as good as can be imagined for the coming couple of years.